As a young wife back in the 1970’s, I occupied myself with needlepoint projects while my husband watched hours and hours of sports on television. Ron was only remotely interested in what I was doing until I started a canvas for a backgammon board (a game he loved), and then he bugged me with “hurry-hurry” to complete the project. During half time of a football game, there was an interview with football player Rosey Grier — and he shocked the sports world by telling how much he enjoyed needlepoint! That’s all Ron needed to capitulate; he took the project from me and finished it himself! When any of his Army aviator buddies challenged his new hobby, Ron would tell them about Rosey!

Through the years, I have been interested in the therapeutic effects  of needlepoint. I always travel with a project that is in my lap most quiet evenings or snowy afternoons. Hours can be whiled away with the simple motions of adding textiles to the canvas and admiring the results.

Recently, I read that English prisons have been promoting a project called Fine Cell Work where male prisoners are trained to do needlepoint. Their projects are sold by local charities and the prisoners get some of the funds. While our western culture links needlework chiefly to women, history tells us that it was, in fact, originally done by men who spent years mastering their craft.

Just this week, my business partner’s father died. In the obituary, I read that Mr. Nalls liked to needlepoint. How I wish I had known that about him when we first met several years ago. There is something special about a man who is not emasculated by the simple act of working with needle and thread. This is an image of a needlepoint done by Mr. Nalls. 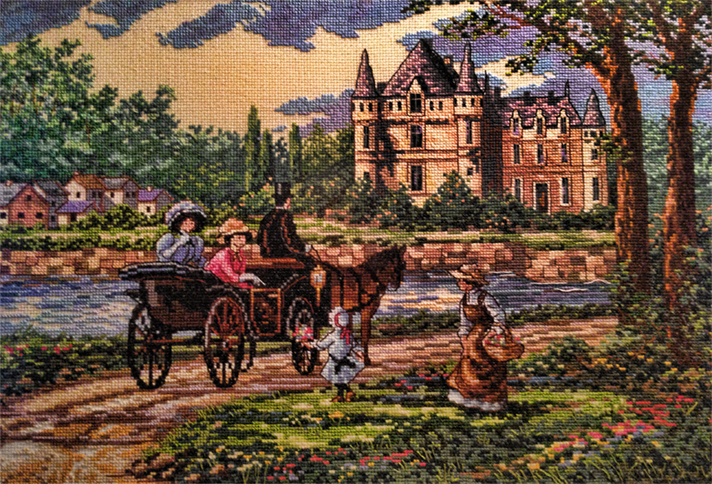