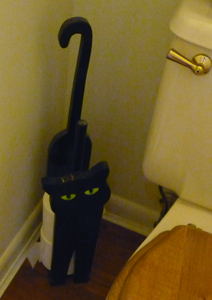 There are four black cats (five, counting this one) who abide here on the hill.  Imagine Fiona’s frustration as she kept encountering them during her first hours here with us!

Little Caesar was very curious and ventured through the woods to greet Fi first, inching down the cypress mulch path and through the ivy for a good look.  Their meeting became too “interactive” for CeeZee, who ultimately fled across the bridge and into the bedroom window.

Maxwell refused to be herded or frightened, but stalked away from Fi’s barking in a disgusted manner.  Likewise, brother Harley.

Gabriel has been through many new aquisitions in his nearly thirteen years here, so a polite yawn was about all he could muster for Fi’s frantic barks.

All cats scattered for the night, leaving Mom to deal with Fi’s explorations during the dark hours.  All, except one.  And Fiona managed to corner this one in the bathroom about 2am, setting up a howl that would have done even ole Charlie (the DailyCoyote.net) proud.