To me, these three little words have a magical ring.  Indeed, a sparkle.  Snap, crackle and POP!

Our “Fourth” was always spent with Grandmother Sylvia in Abilene, Texas (or wherever she lived at the time).

The drive up to Abilene (or Dumas, Dalhart, Amarillo and other parts north) was long — around 12-14 hours in those days.  Backroads across Texas.  My mother would have our little car (I remember a green Studebaker) packed, and we’d pick up my father at his jewelry shop around 5 o’clock in the evening on Friday of the holiday weekend.  My brother and I would be in the back seat, squabbling over who controlled the most territory with books and feet and such.  My parents in the front; my mother smoking her incescent cigarettes. 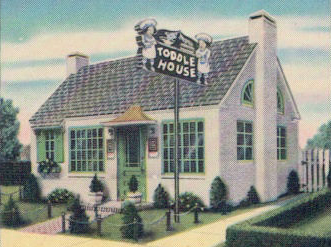 We’d make it to Austin where my father stopped at the Toddle House for one of his favorite dinners — steak and eggs.  The cafe was on 19th street, just a block off Guadalupe (The Drag) and only a short few blocks were I would be “born” at the University of Texas just a few years later.  It was a mile-marker on the trip, because after dinner, my mother would get in the back seat and I would be in the front with my father for the rest of our long  journey.  Ten+  hours of having my father all to myself, while the rest of the family slept in the back seat.

Up the road we’d go to Lampasas, then on to Goldwaithe.  At the hillside intersection where signs first pointed us to Goldwaithe, my father and I would always have a serious discussion about how to pronounce that name, declaring ourselves grateful that we lived in Victoria.

Brownwood would be next, and it was large enough to have an all-night cafe for my father to get coffee.  A cup for the road (and maybe a piece of pie), so we could keep going.  I now know, looking back, how much he loved his mother and how very anxious he was to have as much time with her as possible on these short trips.

As sung by the Mills Brothers … and my Dad

My father loved to sing.  It was my job on these trips to chatter to him, helping him stay away.  Perhaps this is when I learned to talk to “anything not painted”.  And I had charge of the radio!  Stations would fade in and out as we crossed the great dark plains of Texas.  So, I constantly fiddled with the knobs to tune in stations with good music.  Sometimes an old song will bring one of our trips out of the mist — and I am with my father in that old Studebaker, heading to my beloved grandmother’s home.

From Brownwood to Rising Star.  There we would turn west to Cross Plains, and on to Abilene.  It would be almost dawn when we arrived.  And my grandmother was always up waiting for us.  Her tiny little home was shining with happy light as we rounded the corner and drove up the alley way to park.  It smelled like fresh baked cookies and bowls of flowers from her garden.  Little tins of the cookies were beside our beds, along with tiny leaded crystal glasses of cold lemonade.

Everyone went to bed, but only for a couple of hours.  Soon, my grand-dad would be stumping around in the kitchen for his breakfast, and then whorling down the alley in his old El Camino to visit his eternal wells.  And the house would stir, coffee would be brewed.  My father and grandmother would sit at the little kitchen table softly talking, laughing.  There was so much love between them; it could be felt by just being in their presence.

The holiday would be full of food and fun.  Baked glazed hams, platters of fried chicken (the kind that had gizzards in the mix), huge crocks of potato salad, fresh tomatoes just out of the garden, jars of sauerkraut salad, cheese bread, homemade carrot pickles, and more.  The table would groan with the pleasure of it.

In the afternoon before firecracker time, we’d have homemade banana nut ice cream.  And my grandmother’s famous 6-layer coconut cake.  (Kin in New Mexico gave me my grandmother’s glass cake pedestal long after she died!)

Sometimes we’d go to a concert in the park, where the local musicians would be playing rousing patriotic tunes like “I’m a Yankee Doodle Dandy” and “You’re a Grand Old Flag”, along with John Phillip Sousa marches.  We’d always have those little flags to wave!  My father was terribly patriotic.  He was so respectful of our flag.  When I see the closing scene in the Yankee Doodle Dandy movie, where Jimmy Cagney steps out into the parade to march beside the soldiers, I always think of my father as a young soldier.  (Folks said my dad looked like Caglney

After dark, folks would set their lawn chairs up along the sidewalks near a major neighborhood intersection.  The dads and little boys would bring out the firecrackers and have quite a time setting them off for our squeals of glee.  Us girls would enjoy “wanding” around with some lovely sparklers.  And the evening would wind down with neighbors just chatting together, and kids chasing the occasional firefly.

Too soon, it would be time to drive home to Victoria.  My grandmother would send a box of mincemeat cookies with us for the trip.  Coffee, cookies and the radio would give my father the energy for the long drive back.