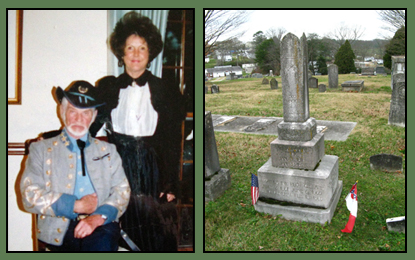 Meet Cleve Smith and his lovely wife, Alma, who live in New Market, TN!  So how did they end up on the itinerary of Hondo’s visit to Georgia? Well, the story commenced about 146 years ago during the Civil War!

Lucy’s research of the Christmas 1863 battle at Mossy Creek (involving several ancestors) led to libraries in the Knoxville area, where it was learned ultimately that the author of several historic works on the battle at Strawberry Plains and Mossy Creek was “still above ground”.  Many phone calls and lots of persistence led to the address and phone number of 77 year old Cleve Smith.

The perceptive Hondo realized that Lucy really wanted to visit the historian and get one of the few remaining copies of his book, so he graciously offered to escort her to New Market!  At precisely 4:11am on the morning of departure for Tennessee, Hondo was awakened by someone who was too excited to sleep — and after many cups of java, he was poured into the Star Car and driven madly away into the fog.  Over hill and dale they went (via the instructions of Little Road Hunter, Lucy’s Indian scout) and finally arrived in New Market.

At the Smith residence, Hondo was a perfect gentleman — entertaining the witty, talkative and tobacco chewing Mrs. Smith, while lucky Lucy listened to battlefield stories from the author!  And then — lo!  there was a hands-on guided tour of three cemeteries and  battlefield venues, with Hondo at the wheel and Mr. Smith narrating!  The trip was a wonderful success, from Lucy’s perspective.

Ancestors of Cpl George W. Wood, CSA, thank Hondo for his generous contribution to the Branner Cemetery mowing fund … and for patience and forebearing in someone’s quest for knowledge.