At last, I am at the famous Horsehead Crossing on the Pecos River in Crane County (West Texas).  It’s been a long journey (and several years) to get here … from Langtry, Texas to Georgia and all the way back again. 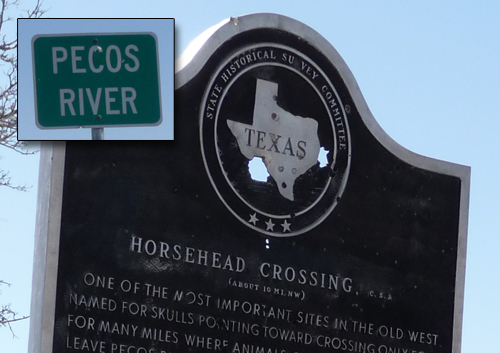 On a long ago visit to Judge Roy Bean’s saloon in Langtry, we were reminded that he claimed to be “The Law West of the Pecos”.  Traveling east just a few miles from Langtry, we encountered a great bridge over the canyon cut by the mighty Pecos River just as it joins the Rio Grande.  When you stand at the chasm and imagine no bridge for crossing, the term “Law West of the Pecos” takes on new meaning!  Reading that historical marker told us that the closest good ford of the river was at Horsehead Crossing, some 140 miles north.

Somewhere in our travels, we encountered Andy Wilkinson, poet and singer extraordinaire from Lubbock, Texas.   Andy sings of the “Goddam Pecos River, pony, horse and cattle killer” in a catchy tune about Charlie Goodnight and Oliver Loving.  This is a map of the crossing — we found it on Andy’s website and we hope he doesn’t mind us using it to illustrate this story.  Andy’s song and the mention of Horsehead Crossing in movies, books and other songs peaked our interest in finding this wild place! 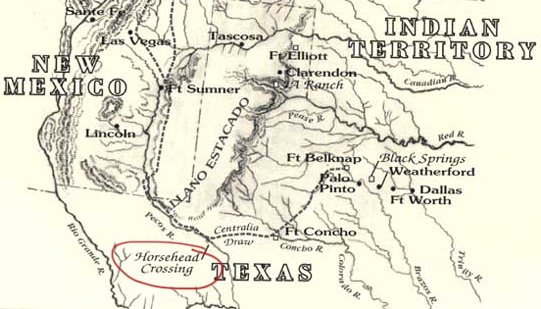 Map of Horsehead Crossing borrowed from Andy Wilkinson (Note: We will return this map as soon as he publishes a new album!)

The crossing site may have varied several miles up or down the river through all of the  years that it was a trail crossing.  While the Pecos River’s banks flatten out somewhat as the river winds its way across the plains of West Texas, it does not have many “hard bottom” crossings such as at Horsehead.  Its banks are sandy and the bottoms of the river are treacherous with quicksand.  In several publications, we found the water described as “briny” and unpalatable. 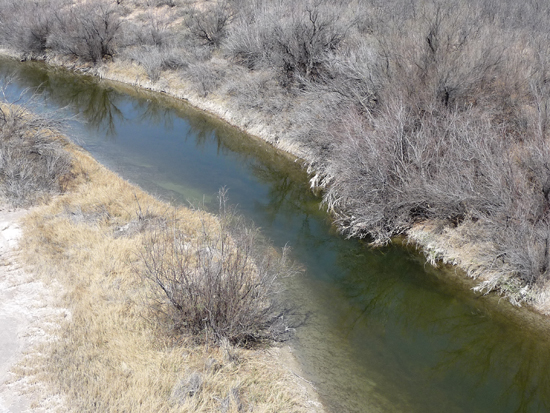 The deep and dark in the middle, the river smelled frightfully at this crossing! 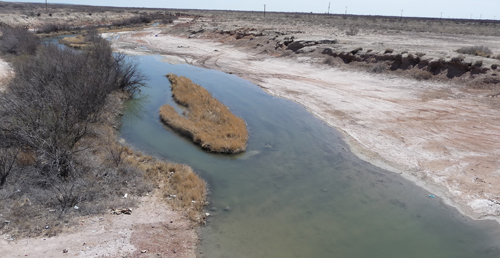 Water is bluer north of Girvin (near Imperial), but the banks appear to be good candidates for quicksand.  It’s desolate but beautiful.

On the road between Girvin and Imperial, which meanders up the west side of the Pecos River (Trans-Pecos, as my kin Julia says), there is a small road that cuts back to the reported actual location of Horsehead Crossing.  We were anxious to find it and drive all the way to the river, possibly seeing the old historical marker on the site.  Unfortunately, we encountered what appeared to be road work — a canal was dug across the roadway.  Sadly, we had to turn back.

The caleche road to the old Horsehead Crossing site

There is not much in this area of Texas any more — oil wells dot the landscape in the absence of trees, and one may see the occasional bovine creature grazing amidst the sage brush.  Indeed, the only hospitable watering hole seemed to be this one — the Girvin Social Club.  Note that the hand crafted sign (see inset) affixed to a post on the building proclaims the name and number of a local lawyer.