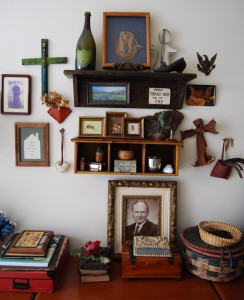 [Yes, it’s a small photo … but when you click it, you’ll be linked to the full sized one.  And that’s how you’ll be able to see the special things that hold memories of my loved ones.]

Where would I start?  Perhaps with the small beaded buckskin bag that belonged to Cynthia Jane Fletcher Hoggard, my grandmother’s grandmother.  She was Choctaw.  The bottle of Dom Perignon was a drown-your-sorrows  libation shared with my dear friend, Judson Roberts, after news of my mother’s murder.  A small pewter slipper belonged to Lucy Fagan DuBois’ daughter, my grandmother.  The eagle crest is left over from my marriage to a U.S. Army officer (but not a gentleman).

A small Texas landscape painted by Dorthie Waters Williams, with whom I developed a greater appeciation of the rhododendron’s blooming in the Irish countryside.  Tiny paintings of bugs and mushrooms are remnants of better days with my late mother — and a carved piece of antler that represents better days with my [late] brother.

Little shelves hold a Chinese chop of my name, sent out of Communist China by Dr. T.S. Tse and Joan as a thanks for our hospitality to them in Hawaii.  Linseed oil mix of my father’s, left from his days of hand oiling carvings he had done.  His harmonica.  (His photo in the frame below the shelves.)

The family Bible.  Sea oats from a beach combing day on Padre Island long years ago.  Mesquite beans from a family cemetery.  A shell-covered box purchased on the Strand in Galveston when Mary Genevieve DuBois Matthews (my grandmother) was a young girl.  Still holds some of her trinkets.  And under it, the cedar box that my father emptied his pockets into each evening — it still holds his pocket knife and sundry small momentos.

The Mexican retablo from Santa Fe was purchased during my brief time as a practicing Catholic.  It hangs beside a photo that we believe to be “Granny Betsy” — Elizabeth James Caldwell (1799 SC – 1873 GA).  “Home is Where the Army Sends You” — the story of my marriage.