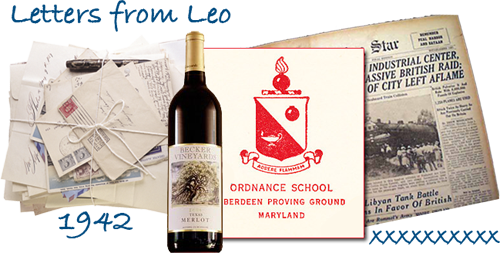 Elizabeth:
Parents born in Hungary.  She brings love letters written by her father (to her mother) while he was stationed at Aberdeen Proving Ground during WW II.

Sue and Susan:
Hungarian/American friends.  They came to enjoy the food and [Texas] wine — and to translate the letters which were written in Hungarian.

Leo, born Lipot Müller in Pápateszér, Hungary about 1912, immigrated to America in May 1937.  Immigration records note that he had been a farm worker of the ethnic group called Magyar in Hungary.  Just a short few years after his arrival in this country, he became a soldier in the United States Army and was ultimately assigned to the Mess at Aberdeen.

At the time that Pearl Harbor was bombed, Leo was about 29 years old.  He may have enlisted in the Regular Army on March 5, 1940 in Queens, New York, well ahead of Roosevelt’s declaration that the US was officially entering the war. One has to imagine that a young man who had lived amongst the uncertainties and strife of Europe during this time, might be anxious to defend his new homeland. One might also wonder if this young Hungarian was assigned to stateside duty in lieu of the European front because of some compassionate reasons.

Perhaps Leo met Mary (also Hungarian) in New York before enlisting … or maybe when he was visiting family on leave from his service duty.  By 1942, the letters he is writing to Mary are very loving and sometimes signed with rows of xxx’s, indicating kisses in any language!  They are sweetly touching and sometimes humorous.

As we listen to Susan read the letters and Sue help to translate them for us, the story unfolds that they were likely married just prior to August 5, 1942 — as Leo abandons the greeting ‘my dear heart’, and begins a letter with ‘my darling wife’.

We hear tidbits of what life was like for a lonely soldier of those times. He is enjoying his position in the Mess Hall, and a lieutenant is complimentary of his cooking!  We find that he listens to the radio and reads in the evenings, sometimes reaching out more than once in his day to write soulful letters to his darling Mary.  He does his own laundry and painstakingly irons uniforms.  He worries about the health and well-being of his bride.  He writes of a trip she will be making to see him on the post, telling her how to change trains in Philadelphia.  He tells her that paperwork has been completed for her to receive a military allotment of about $34 monthly!   A lovely story unfolds in his words.

Leo and Mary have a short but apparently happy marriage.  Three children are born to them, including Elizabeth in mid 1946.  Leo dies when little Lizzie is only 2 years old.  Mary lived until 1995 and never remarried.