Debra with pagan sculpture (she the one on the left)

Meet Debra
She’s pretty close to a soul mate, even though I am almost as old as her mother.  I’d like to know how many miles we have been together, in the past 25+ years that I have known her (yeah, she’s 50 now!).  From New York to Santa Fe (where she cornered the excited dude above).  Colorado, Indiana, all over Georgia — where else?  Looking through some of my old career photos of time at Simon/Indianapolis, I find Debra standing in the background peeking out from under some groovy hat, blending in with my staff as if she belonged there!  I can tell you that the Paramount Hotel in Manhattan will n-e-v-e-r be the same after our stay there!  Nor will tea at the Palm Court at the Plaza!  Or perhaps the Russian Tea Room.

She’s way fashionable, in a funky kind of way.  Terribly funny.  Ever so pretty.  And wild as a ‘March Hare’ (GO TO definition).  We have gotten into about every form of mischief that two loco gals can get into … and some things twice!  I’d better stop here with that, to protect the innocent.

Seamstress ExtraOrdinaire
Did  I mention that she sews?  Only not like your mom used to sew.  We’re talking waaay cool stuff here — from nightgowns to ball gowns and everything in between.   In the old days, if I could dream it up or show her a picture, she could make it.  I had a wardrobe that would-not-stop when she was my next door neighbor!  And some of those things are in my cedar chest for posterity (well, also because they no longer fit).

A Great Mother
Debra’s girls (see Facebook album) were frequently our companions for trips around the country.  Merci could have been our surrogate mother, as she was usually serious and disapproving of our antics — however, Lea was game for anything/everything.  I always thought they were the cutest little girls … and now I think they are the most gorgeous women! 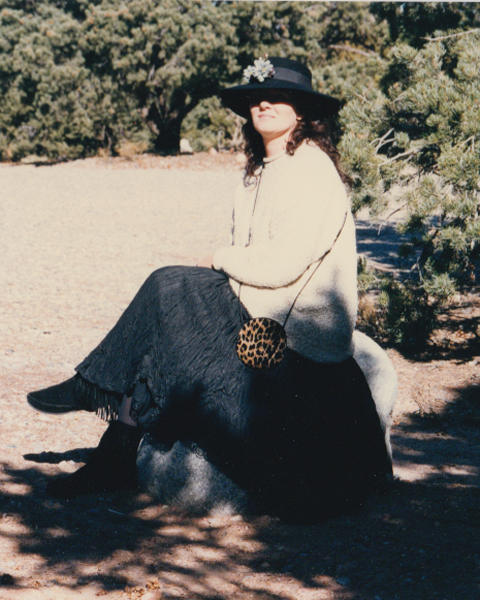 Styling
I loved this old photo taken at the Wheelwright Museum in Santa Fe.  We really had the ‘costume’ down pat!  Long skirts and warm sweaters, tall moccasins with lots of fringe, trés elegante hats (usually of our own making), and the essential mini-pocketbook for an exhausted credit card or two.  Once we went to WalMart in Santa Fe (to buy extra suitcases for carting home our too-many purchases) and the place was full of Indians!  She and I were the only folks in the place wearing moccasins.  Ah, touristas!