An amusing episode of squirrel watching from their vantage point on the sofa in my office!  Fiona and Caesar (constant companions) are mesmerized by a little squirrel at the feeder outside the window.  The amusement continued until Fiona elected to go outside for a closer look at the squirrel — who scrammed! 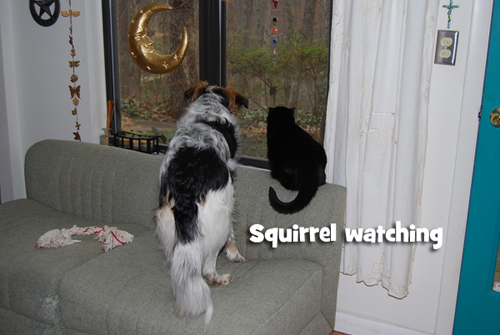 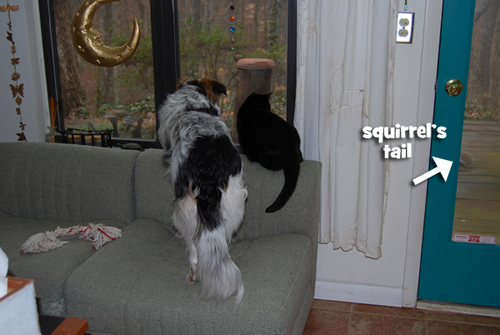 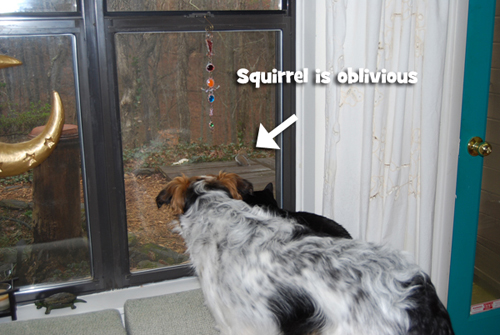 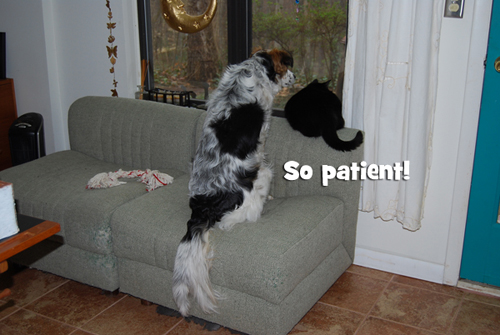 Somehow Fi has sensed that she must go into hibernation for this rainy afternoon.  Trips outside mean being way-laid by Mom upon re-entry, with a towel to wipe off muddy paws.  It simple is not worth the trouble, Fi thinks.

All kitty friends (term ‘friends’ used loosely at this point) are sleeping in baskets of warm laundry or sandwiched between pillows on the bed or sprawled on the clerestory ledge in the kitchen.  No action here, alas.

And Fi is tired!  From chewing up a large sponge, a small piece of firewood, one whole new rawhide chewy, and several used dryer sheets. 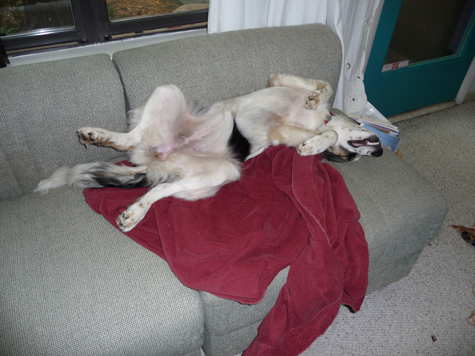 A quiet Sunday afternoon in the office. Note that we are smiling in our sleep! 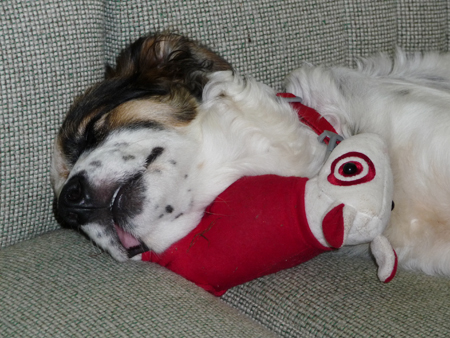 Little stuffed toy does a double take!  Gift to Maggie from Cousin John McCleskey, this little doggie has become a favorite companion for Fiona.  Note how tongue is hanging out blissfully!  Must be a good dream. 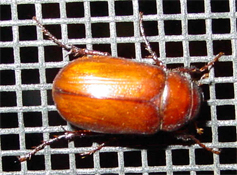 What wild delight!  Fi’s new friends are the JuneBugs who whirrrr around out on the deck!  They actually “talk” to her with their buzzies, so she whimpers and whoofs back at them!

Just one JuneBug is good for about 5 minutes of playtime, before he is accidentally smushed under a nice soft paw.  Oops!

Luckily, there are lots more.  So we leave the crunched remains of our friend for Mom to pick up and trot out happily to look for more! 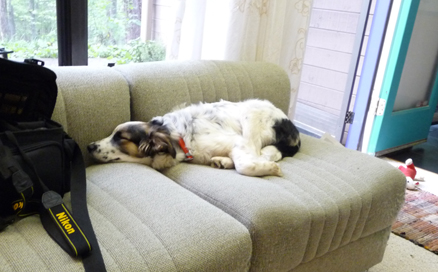 My fierce watchdog … alert and on watch

As you can see, Fi is exhausted, catching a nap on the sofa of Mom’s office.  We discovered a nest of mice under the firepit deck, and brought the dead ones to Mom in her office, one by one.  This was after we chewed up a carved coconut that Mom brought from her home in Hawaii many years ago.

It was a tiring morning.  All doggie dollies were moved outside to the deck for play, only to be carried in again when rain started — she is very organized, keeping all of her toys in ONE spot, either inside or outside in a large heap.

During the rain storm, Fiona and cats became well acquainted, as they were forced to stay inside all day.  The big cats cornered her in the breakfast room (they are 20 lb dudes), just being curious — and Fi set up a howl from behind the rocking chair to be rescued!  (Did I say fierce?)

Miss Fi had to rest up for a trip to Starbucks where she has a cup of whipped cream (and even eats the cup!).  After Starbucks, Fi gets a run in the park where she chases an old tennis ball.  Luckily, it will be bedtime soon!